From PDF (back) to DWG

Disclaimer: I was politely asked by Emily Donalds from Cometdocs to possibly feature a post on their PDF to AutoCAD webservice. While wary about advertisement, this is an open and free offer and useful for CAD users.

On http://www.convertpdftoautocad.com you can (obviously) convert PDF files to the AutoCAD DWG format. In a time were probably every single PDF containing CAD drawings was originally created as a digital drawing anyway, it makes sense to optimise on this kind of drawings. 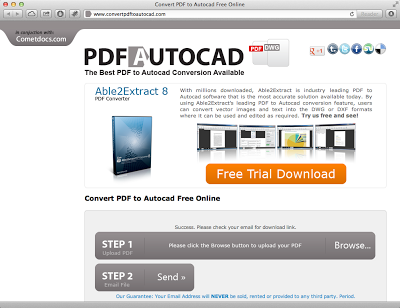 You can go to the website and, without creating an account or registering, you can upload a PDF from your computer. It should not exceed 40MB and you need to be willing to enter your e-mail address, cause the conversion process will happen on their servers.

The service is free and upon testing, was reasonably fast.

The example I tried was a PDF from a elderly care centre provided during a research project and was originally drawn digitally (although I'm not aware of the exact software that was used). I only had access to 2D PDF drawings. The file was about 350 kB so it was fast to upload.

After a short while (a few minutes), I received an e-mail with a download-link. The file stays online for about 24 hours and although the link is not protected, it is including a globally unique ID (guid), so it would be statistically impossible to retrieve links for other files. 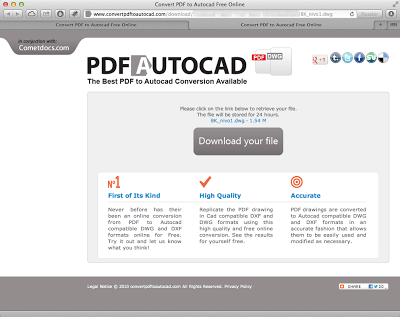 The file is quite large (almost 2 MB), which is caused by the abundance of smaller lines. All dashes and dots from linetypes and all hatch lines become separate line entities. The drawing in itself looks quite faithful considering the loss of information inherent in a vectorial PDF rendition of a CAD drawing.

I detected that it was an AutoCAD 2000 format DWG (the first six bytes in the file contain "ac1015"), which is an old release of the DWG format, making it compatible to almost any software that can read DWG files. This is a good thing.

It opened nicely in Adobe Illustrator CS4, Rhino 5 and ArchiCAD 16 (I don't have AutoCAD installed anymore), where I could detect that three layers were included: the obligatory layer 0 and two layers for all filled solid hatch entities (P) and another for linework (P).

In my first test, the text was not actual text, but a series of lines and polylines, which is less convenient, but this was already the case in the original PDF. A second test, with a PDF with actual full text entities, they stayed real text, on a separate layer (T).

For me, personally, it would be a good way to replace a PDF as underlay with a DWG as XRef in e.g. ArchiCAD, since PDF underlays can not be snapped to directly, although you might be able to get usable results using e.g. Illustrator.


Beware, this is NOT an OCR system, so your PDF needs to contain vectorial line drawings, as is usually the case when they are generated by CAD software.