September 24, 2010
DraftSight, on which I already reported, has now been released for OSX as well as Windows. And a Linux version should be coming. This is free 2D CAD, but not Open Source.
http://www.3ds.com/products/draftsight/draftsight-overview/
It's based on the ARES Commander software from Graebert, but only 2D. I loaded an old AutoCAD drawing and found the interface not too snappy. And frankly, while AutoCAD r13 or r14 was a good program, it has evolved. As a "copy" of an old AutoCAD 2D CAD program, I wonder why they don't try to do something original themselves.
Draftsight reads DWG files, uses them as native format, and allows export of a drawing into SVG, PDF, bitmaps and, wait, STL? What? A 3D format to be exported from a 2D file? What were they thinking? Well, the STL export did not work due to missing components. And exporting the drawing into SVG crashed the application... Damn. Well, the SVG could be loaded into Inkscape, luckily, but then it was slow as hell. And the DXF export from Inkscape did not work either. So much for open formats and file exchange.
Some minor remarks from the EULA:

The Non-Commercial Release Period will continue until release of the commercially released version of the Product. 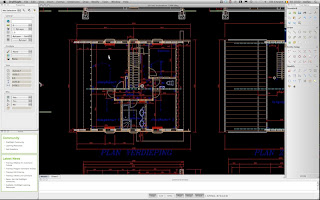 Another 2D CAD option is CADuntu, which is a Qt4 port of QCAD. This is Open Source and while it aims at being an alternative for AutoCAD, it also tries hard to do everything in its own way, including the way commands are entered. I applaud the original QCAD team for at least attempting to do something that is not simply trying to mimic a really old AutoCAD LT version.
Info on http://www.caduntu.org
It should be available on ALL platforms, but right now, focus is on Windows and a basic OSX version. But as QCAD and Qt are both cross-platform, I assume that it can be ported if not already done.
It is less polished than DraftSight (or ARES) but I don't think this should bother anyone trying to use it. The biggest issue might be that CADuntu only reads DXF files (and assumably, only in their older forms). This is to be expected, as the DWG libraries used by ARES Commander and DraftSight (and BricsCAD and ArchiCAD and VectorWorks etc...) are developed by the Open Design Alliance, which does not allow providing the libraries for Open Source applications. You can, as a developer, use them, but not with sources. If full DWG-compatibility is important, there is NO OPEN SOURCE alternative available.
I managed to transfer the model into CADunty by exporting a DXF r12 from VectorWorks, but if you have VectorWorks, there is no need for DraftSight or QCAD/CADuntu anyway. And the application almost froze because of the quite complex drawing. 15 seconds to refresh a drawing after zooming. Sigh... 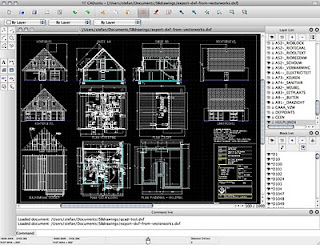