Getting along with Grasshopper on a mac

I have slowly began to learn Grasshopper (and Rhino with it). But as a Mac user, it is a bit cumbersome to launch Parallels and wait several minutes before the whole systems is operational and responsive. Once it it fully launched, it is workable. 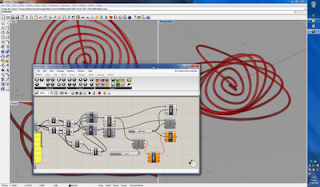 But I have a conceptual issue with Grasshopper. I am experienced with programming in code (C++, php, Java, VBA and a tiny bit of Ruby and Python). There are so many things that I can easily write in a one or two lines of code that take a lot of nodes in Grasshopper to do so. And the whole thing becomes a mess... But replacing this with a scripted node will make the whole thing hardly legible.
Now I sometimes want to repeat a series of nodes, to make the solution more legible, as not to have nodes inside another part of the solution linked in between all the others.

My main gripe: for small constructions, the visual node-connection framework is nice, but when complexity arises, it is really hard to "read" the network. Adding descriptive names is one part of the solution, but then nodes become very tall and the layout suffers.

All in all, I would like to see additional attention be put into osx-compatibility and in the legibility of the visual network. I know that Puredata/MAX have always been designed with the idea that the visual code would also show all you need to know. Now many settings and parameters are buried inside the nodes.
But to end with a positive node, you can get nice results too. The image here is rendered with Cinema4D from an OBJ file exported from the baked Rhino geometry. 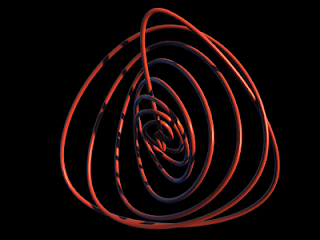 One quality this example had: the two main steering parameters led to widely differing results, even with small adjustments. So the range of forms this one script could generate is endless.
But I had to turn of some nodes, as the generated geometry became quite heavy.