June 06, 2011
In my recent quest to discover possible tools for design analysis, I already noticed Karamba, which is a free (for now?) Grasshopper-plugin for integrated structural calculation.

It means you can define a structural system, with beams and loads and with control over connectivity, support conditions (degrees of freedom of nodes) and analyze it directly within Grasshopper. Real-time if possible. Nice.

So I launched Parallels Desktop and stepped through the manual (which is well-written!) and tried to create a basic learning example. Don't shoot me if there are glaring mistakes in this, as I have to re-learn some of the things that have been kept under a rock for the last 10 years (Finite Element Analysis, Building Mechanics).

The following screenshot displays a small example with three nodes, two beams and a single force. The nice thing is that, once this is setup, you can interactively play with it, e.g. move nodes, adjust the force, with the simulation running alongside. 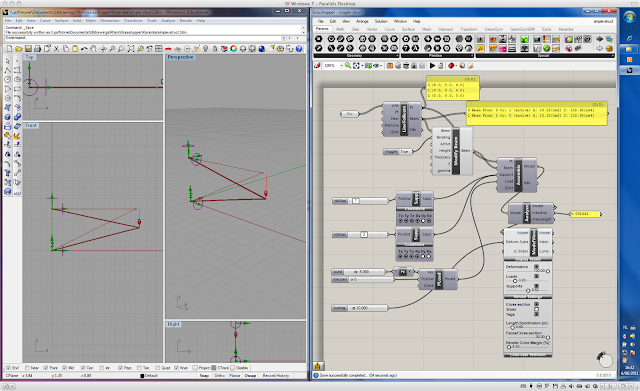 With some preparation and list-juggling, you can make quite complex structural systems. Just not right now for me, as I have to ensure I do some side-by-side comparisons (running existing examples through different systems).

Just playing a bit and adding a second example. Here I used a freeform curve and using the Divide and Shatter components in Grasshopper turned them into a range of different curves, fed into the Karamba calculation. Being able to tweak in real-time the position of the load (onto any of the nodes) has a huge didactic potential for students and designers.