May 19, 2011
With all the attention that the Grasshopper plugin receives for Rhino, it is understandable that people look less at other approaches. However, I was pleased to understand that the current test-version of iRhino (the Mac OSX port of Rhino), which is now more or less in sync with Rhino V5, contains the PanelingTools.

The Paneling Tools are a plugin for Rhino v4 or v5 and are already included in the latest builds for the OSX version. These commands add the creation of grids and panels and patterns to Rhino. You can generate independent grids or add grids based on surfaces, curve/surface intersections or projections in the first step and then use the generated grid of points to generate paneling.

Paneling can follow patterns (pre-set or custom created) allowing you for quite elaborate translations of freeform geometry into something more rationalized for construction and/or fabrication.

The tools can be controlled with a series of "pt" commands, and also through RhinoScript or Grasshopper.

The OSX version lacks one important detail: a GUI! There are no toolbars to call the commands so you have to type the commands yourself. That said, this is not as bad as it sounds. Just start to type "pt" and a popup window presents you with an autocomplete list of valid commands.

While these tools have been in the Rhino Labs for quite some time, I only realized recently that the Mac-version has received them as well. 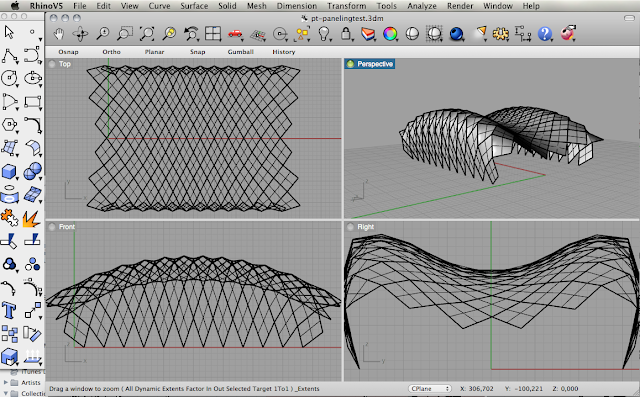