March 05, 2013
Last week, I got a question from one of our master thesis students. She is working on a historical reconstruction project and received some old files from the architectural office, responsible for a renovation project in 1993. They used ClarisCAD. The files had no extension and the software is, obviously, part of CAD history.

ClarisCAD is not available anymore, but on Macintosh Gardens, an archive is maintained with downloadable installation files. You can download the full software freely and it runs without requiring to enter a serial number. I assume, as the software is abandoned, that using it can be considered as some kind of "fair use". I did not fully investigate though and as it was only used to recover some files, I think it is OK.

To be able to run this on a current computer, you need to emulate the Operating System (unless you have the actual hardware still running around somewhere).

Luckily, there are some Open Source systems that allow you to do precisely this. I used SheepShaver. This can run on most operating systems. It emulates a PowerPC hardware and you can install the classic MacOS in it.

There are some caveats: you need to download installation discs for the OS (unless you happen to have the original ones from quite some time ago) and you need a hardware ROM which you can only legally get if you download it from an actual hardware Mac you own...

Some more information on setting up SheepShaver.

While it did take some effort to get this far, this wasn't the actual crux of the message. 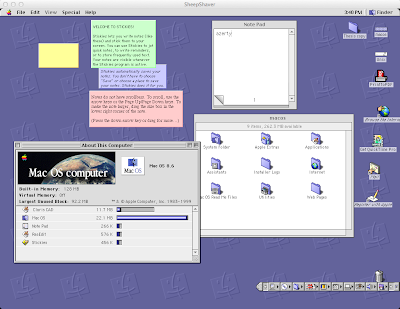 In short: I looked hard for both installation discs for the OS and for a ROM. I used to work in an architectural office in MacOS 8.6 (and some 7.1 and 9.0 machines as well) and think that at that time, the hardware was even too now to get the right ROM I was trying at the time.

And you'd think that it was easy from then on?


Recovering the metadata of the files

Now once I got MacOS 8.6 running and ClarisCAD was also available, it could still not open the files, even though they were copied to a folder that was visible for the virtual machine. They simply did not show up in the open dialog.

I created a new, emtpy file, drew a few lines and saved as a ClarisCAD file. Surely, this showed up in said dialog. So there was something missing. And then I remember that, back in the days, people sometimes used to hack the file Resource Fork. This is a system to store information about a file: the metadata, such as the type of file and the application that created the file.

I remembered that there was some system administrator software, called ResEdit, which you can still download and install in the classic OS. I opened the freshly created ClarisCAD file and looked at the Resource info. The File Type was "CAD2" and the creator was "CCAD", short for ClarisCAD, I guess. So I opened one of the provided drawings, added a Resource Fork (ResEdit can do this automatically when opening a file) and then opened the info dialog, in which I could manually type the missing pieces. Closing the file saves the resource fork.

And yes, now ClarisCAD recognised the drawing as a valid file and can open it. I could open all but one of the files. The last one complained about having not enough memory, although I increased the OS memory to 128 MB and the memory provided to ClarisCAD to 12 MB (instead of the default 4 MB).

Converting the files into something usable?

Now ClarisCAD did not provide the means to convert the file into something usable out-of-the-box. There is support for the old PICT format, but this turned the 2D CAD drawing into pixels.

I really wanted a DXF or DWG, but assumed other vectorial formats would be acceptable. I finally chose to install a PDF-printer driver (I used the freeware PrintToPDF from James Walker). You can set this printer as default in the Chooser menu.

Now I can print the ClarisCAD document to a PDF and that can be opened in other software or can be used as an underlay. 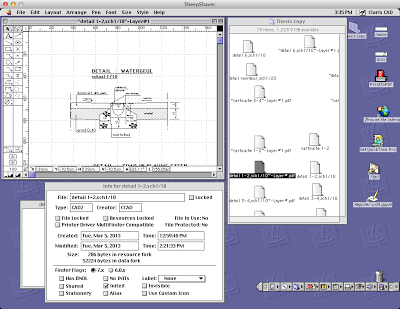 The process was not intuitive, but I survived installing an old OS, emulating discs and drivers, on a machine running a totally different architecture. I have good hopes that some older discs can still be run this way, but then I have to make disk images as my newer machine has no optical drive anymore.

When testing, I had the occasional crashes, but it was pretty to fast to reboot the whole system on a modern computer, so that wasn't too problematic.

And I also had to set the keyboard to a Flemish layout ("azerty") to make typing more convenient on my machine.