February 28, 2012
MoI (Moment of Inspiration) has been around for quite some time, as a standalone modeler for Windows. It is developed by the former creator of Rhinoceros 3D and focuses on freeform geometry primarily. The phrase "SketchUp for MCAD" is sometimes heard to describe this software.

This is a NURBS modeling application, with a particular attention to user interaction and a minimal interface. You can use it mostly using a mouse or even a pen (e.g. from Wacom) and I assume that it would work mostly fine even on a touch screen. Could the OSX version be a hint of a possible future iOS version for iPad? I don't know, but it makes sense and would be really welcomed.

The interface is mostly icon-based and is not crowded at all (unlike many other CAD applications). The tools are easy to understand (especially when you have been using a program like Rhino before) and there are no commands to type or menu's to step through. There are shortcuts you can use, however, to get more productive.

Modeling is fairly interactive and everything can be seen fully shaded in the viewports. When you activate a tool, sometimes more tools are visible in an opening sub-panel and the options for the particular tool are displayed above the tools in an additional part of the side pane.

All the usual basic commands are available, from extrusions and lofts, to sweeps, revolves, a set of primitive solid objects and Boolean operations. There is also a set of Curve creation tools and especially the sketching of a curve makes sense in this application.

But it is also a real CAD application, so you can edit curves with their control points, use snapping and coordinates and import/export to other software.

It's native file format is the same as in Rhino: OpenNURBS (*.3dm), but it can export to IGES, sat, STEP, obj, stl, 3ds, lwo, fbx, SketchUp and even AI (Illustrator) using a projected view. You can read some other formats too:  OpenNURBS, IGES, SAT and STEP and Illustrator files (ai, eps or PDF format). So you can easily integrate this application with other software.

It is a commercial, closed-source application and the Windows version was about $295, so I expect the OSX version to have the same price, when it is officially released. You can test the beta-version for free and there is a trial for the Windows version available. 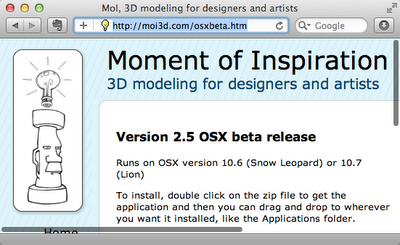