This week, for the first time, BricsCAD is released for the three major Operating Systems available: Windows, Linux and now also OSX. After getting rid of its IntelliCAD legacy, the Belgian company Bricsys retargeted BricsCAD as a DWG-compatible development platform for all kind of CAD uses: 2D drafting, 3D modelling and rendering, custom development, Mechanical Design and (a long time since the demise of the “Architecturals” module) now also for BIM Functionality.

Let’s start with that first: How does BricsCAD approach BIM?

From the Release notes: “Instead of creating a set of dedicated BIM primitives like walls, slabs, columns, etc..., each with their own restricted behavior and properties, we opted for offering maximum flexibility. Any 3D Solid can be used in a BIM model”

This is interesting and in line with the way freeform and modelling software approaches BIM: define any geometry and classify it afterwards (e.g. SketchUp, Rhinoceros).

BricsCAD is DWG based, but supports IFC import and export.

When you launch BricsCAD, you get a welcome screen, allowing you to start with a BIM template and set the intended units. 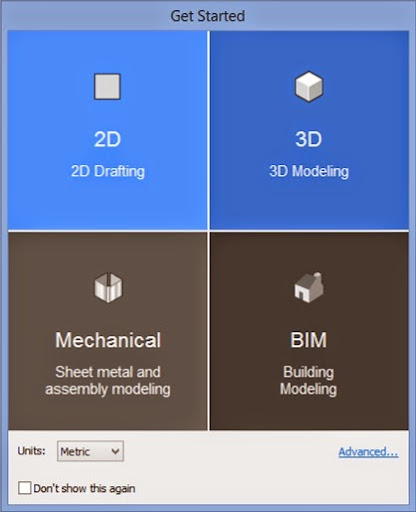 And than you can start modelling. There is no wall tool, no floor tool. Just geometric tools and operations.

I’ve use the first of the 3D Solids tools to draw the contour of a house, setting width and height along the way. Use the regular snapping and ortho modes as with any drawing or modelling operation. 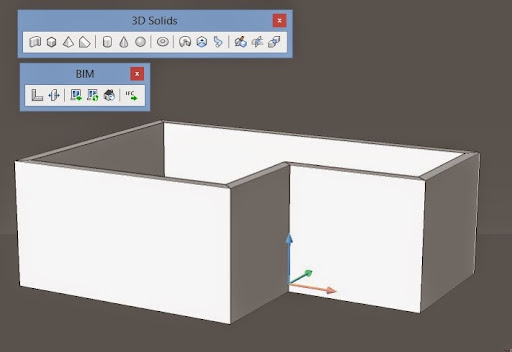 In addition, there is a series of BIM-oriented modelling tools: BIMCONNECT (to solve corners between solids), BIMDRAG (like push-pull but oriented to adjust element positions and thicknesses), BIMINSERT (to insert doors or windows, which are stored in separate DWG files).

They are gathered on the BIM Toolbar.

BIMINSERT requires some further explanation though.

From the release notes: “Windows and Doors are native .dwg files which can be inserted in walls or slabs by the command BIMINSERT.

There are a few basic examples installed, but you have to ensure you work with the right units set up.

Oh, and here you have the OSX version by the way… 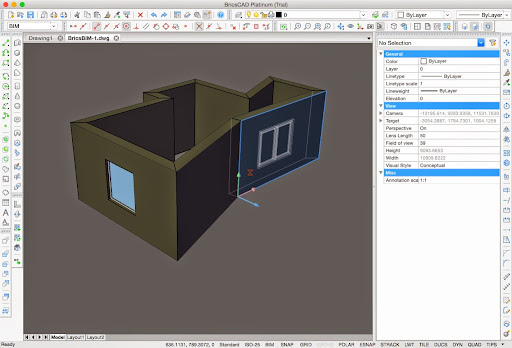 You can draw any shape you want to use as a Window or Door and by adding a custom “Void” geometry, it’ll make the required opening in its host wall or slab.

I remember that Architecturals and before that Triforma, used a parametric approach, where each window or door was created as a series of mostly geometric rules to fill in an opening with frames and glass panes. The approach in BricsCAD is closer to how you would work in SketchUp or even the way you create a custom Window in ArchiCAD by drawing slabs and other objects and having one or more slabs with the “WALLHOLE” or “WALLNICHE” ID to indicate voids.

But let’s not forget the major features aspects of BricsCAD

We already mentioned it is now fully cross-platform on the three major operating systems: MS Windows (32 and 64-bit), OS X (64-bit only) and Linux.

And is it a “real” Mac version?

I’ve dabbled a bit with the OSX Version and noticed it’s not Retina-ready (although it improved after using Retinizer), so icons and many dialogs look pixelated on a Retina-screen. Text in screen controls becomes sharp, but the Property Palette stays low-res.

It is a cross-platform application and it doesn’t use the typical OSX styles. This is not a hindrance in using the software, but it might be a disappointment to Mac lovers. I consider myself a moderate Mac lover and I fully understand their use of a cross-platform interface library (wxWidgets), which renders native controls and integrates fairly well, but it is not Mac-like interface you get in the end (so no integration with Notification center.

It’s low price has always been a major asset to sell the software.

Initially, BricsCAD was targeted as an AutoCAD replacement, but the last few years have shown much more dedication to become a platform on itself: compatible with DWG, but more and more focusing on delivering features that are required for end users.

To be honest, one of the biggest approaches to growth for Autodesk has been its extensibility: Lisp, DCL, macro’s, VBA, .NET, C++, COM… You name it, AutoCAD has it. And BricsCAD (well, primarily the Windows version) delivers a complete developers solution: source-compatibility with ARX (the AutoCAD Extension API), LISP.

If you are still accustomed to VBA, beware that it is only available for the Windows 32-bit version. This is said to be a Visual Basic for Applications limitation, although Office for Mac has been able to circumvent this somehow.

And they license this freely to everyone who registers as a developer.

Bricsys is based in Ghent (Belgium) and while they have programmers in other parts of the world too, they keep their Belgian roots. This was the team that once developed Triforma on top of MicroStation, which was later sold to Bentley.