Moving from CorelDRAW to …

I have been a longtime CorelDRAW user. Around 1997, I bought a license for CorelDRAW 7 when I was working as an architect. And till today, I have good memories of its decent drawing tools, multi-page layout capabilities and very usable grids and snapping tools. It came with a huge third CD-ROM filled with clipart. Quality was OK, content varied, but just to point at the times we were in, you received a full third book as a printed catalog of all clipart! 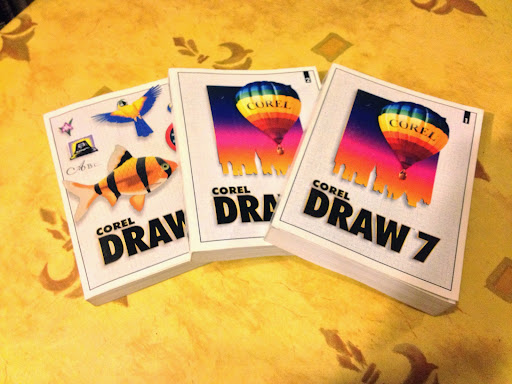 CorelDRAW is not just vector drawing. It was a suite, including PhotoPAINT, which was more than enough and replaced Photoshop for me. The other company programs varied over the years, from CorelDREAM (an entry-level 3D modelling software) to R.A.V.E. for Flash animations and some additional utilities, such as a Font manager, Image Vectorisation, a collection of fonts etc… The computer store suggested my to buy it as an upgrade, which did not pose any problems whatsoever for installation (“You can upgrade from an elephant”, the guy in the shop told me). This was before online activation schemes… Just a serial number on the CD-ROM installer box.

When I joined the university in 2000 and started teaching, at one point I was responsible for an introduction of image editing and introduced students to Photoshop Elements 4. I had learned to use Photoshop 7, which we used at the time, but the academic and student pricing where not worth it for a brief introduction.

I also used CorelDRAW 9, as we had it freely available as part of our campus agreement (which was, alas, never updated since). I still preferred it over Illustrator and Photoshop, initially. After some time, I got to know Photoshop better and discovering the sheer amount of online resources, tutorials, books, lessons, tips … I started using it more. But let’s not finish here.

I did experiment with Linux distributions for a while. After all, what do you do when writing a PhD with a deadline four years in the future? No CorelDRAW and no Photoshop to install, but Inkscape, GIMP and Scribus seemed valid offers, if a bit uncommon and not too stable or compatible with my existing documents.

When I switched over to using a Powerbook and later a Macbook Pro, CorelDRAW was not usable anymore, so I had to improve my knowledge on Photoshop and the other Adobe tools, as everybody else seemed to focus on these.

The Powerbook also came with Omnigraffle, which I used quite extensively for the diagrams and UML-like schemes in my PhD. It had nice features, such as cleanly aligned connector lines and drop shadows. 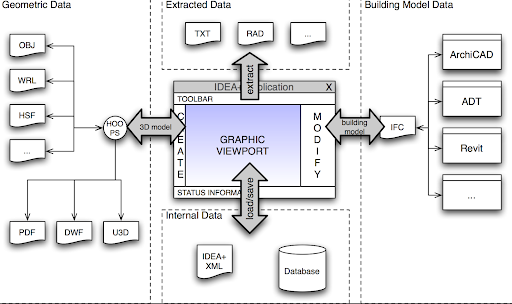 But it was a one-time license only and once I switched to an Intel-based Mac, I could not use it anymore.

During an educational project, I got some budget, so I bought the Adobe Creative Suite CS4, which included Layout and Web tools. It was a perpetual license, for about €400. Bear with me a little longer, as this is important. I also bought a few books to learn it properly and get up to date (jumping from PS 7 to PS CS4 was quite a big step).

I never got around InDesign, although at architectural schools around here this is seen as THE way to present your designs. That is, make AutoCAD drawings, finish them in InDesign (and hope that no design changes occur) and maybe even integrate into unmanageable Photoshop documents with some added SketchUp images.

Layout in CAD or BIM?

But as I am a BIM evangelist, I prefer to do the layout directly in ArchiCAD and keep the model live at all times. But then again, I’m not in architectural practice and don’t submit to competitions, so what do I know…

Rest assured: I know what I know and from colleagues who are devoted VectorWorks users I also understand that they prefer to do their layouts inside VectorWorks as much as possible.

Quickly, CS4 became outdated and 5, 5.5 and 6 were released soon after. I reasoned: as long as CS4 works with newer versions of OSX, I can bear with it, as this is not my main workhorse anyhow. It still works today, on OSX Mavericks.

But then Adobe introduced the Creative Cloud concept: you pay a monthly fee and get everything they have. That can be a fair proposal if you are professionally into graphic design, or web development, pre-press, video-editing or any other creative business that does not focus too much on 3D.

They also offer this to educational users, but at very student-unfriendly price: €20/month for the first year and then €30/month from year 2 on. So that is about €240 + €360x5 = €2040 for a student who finishes her architectural degree in 5 years (which is the minimum you need in Belgium).

At the same time, AutoCAD, ArchiCAD, Revit, VectorWorks, Cinema 4D, Artlantis, 3ds Max, Maya, Maxwell Render, Unity can all be used for free. As an exception, Rhinoceros is €195 once and optionally €95 if they have an upgrade (but you are to keep the license perpetually and use it commercially as well).

So I wanted to get a better look at alternatives that are decent, usable and affordable.

I started reading reviews and some programs always seemed to be referenced (and have quite some things in common).

>> Here is a good overview…

Pixelmator is a cheap Image editing software, with a slick interface, decent image editing and effects. It is OSX only and many effects are permanent, but for most pixel pushing work it does the job. Price? Around €25, although I got it for €14 during a discount action.

It even has a smart erase tool, which reconstructs the background behind a removed object.

There is also a (hidden) vector-drawing mode, but without vectorial export, I’m still wondering what it would be good for… 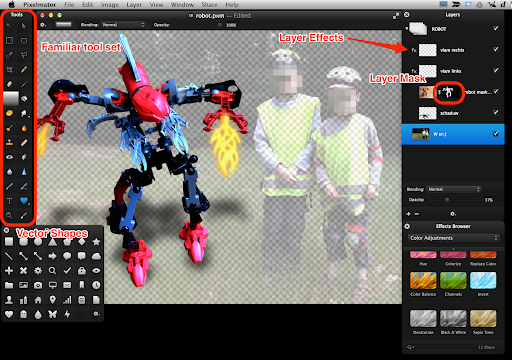 iDraw is a cheap vector editing software for OSX, also with a slick interface and a decent set of drawing and manipulation tools. It is obviously not as extensive as Illustrator, but it is very well thought out and quite complete. Price? Around €20 (Check).

There is also a very comparable iPad version available. It might seem to be focused more on Web and App design (with templates for iOS apps included by default). It has a smart system of object effects (strokes, color overlays, blending modes, drop shadows…) which can be layered on top. It works also fine for screen output, with pixel-perfect previews and retina-support. 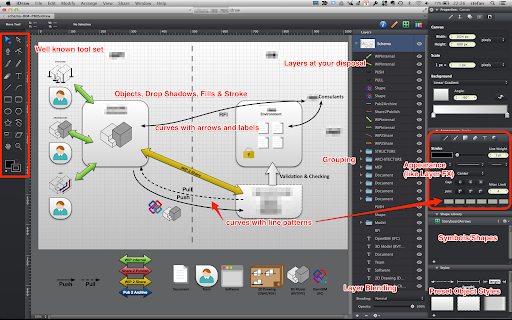 There are some alternatives, but I’m usually put off by some very basic limitations. One example of something that convinced me from iDraw was the way you can draw on-grid and still use the grid when stretching or moving points, with also good snapping. Finally something that works (almost) like CorelDRAW.

And recently, I heard about Affinity Designer, from Serif, who also have a portfolio of fairly cheap SerifPlus applications for image editing, vector drawing and lay outing (for Windows). Affinity got a huge boost on Twitter and many people where stunned at what was promised: an alternative for Illustrator, at a fraction of the price and without subscription. 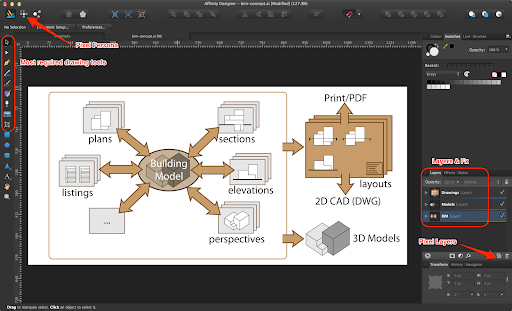 They did a free beta and promised a cheap, perpetual license, through the App Store. When released, they offered a discount, so I had it for €35 (now about €45). At that price, you get a very smooth, professional and quite complete Vector editing software, with RGB and CMYK support, decent PDF, PSD and even AI (partially) support. It is only for OSX, so beware. They also announced a Photoshop and InDesign alternative in the future, with a shared file format (!).

I’ll do a more complete review of Affinity in another blog post. So stay tuned.

In the end, I’m quite pleased. While I would still love to have CorelDRAW running natively on OSX, I now have a set of usable graphic design applications, at a fraction of the cost of the Adobe Suite. In fact, for less than €100 you can have one or two very decent graphical editing apps that you can use perpetually, without subscription and no educational limitations.

To keep myself into learning and using them, I enforce myself to not use Photoshop and Illustrator anymore. CS4 is still installed, but I tend to only launch them for compatibility reasons.

Surely, I miss a few of the features of Photoshop and Illustrator. They are industry-standard applications for a good reason, but for my usage, I can live without them now.