While the Unity Game Engine has an integrated Lightmapping system (Beast, now from Autodesk), you need a Pro-license for Bounced Lighting. There are cases where it makes sense to import pre-rendered lighting from an external software. This blogpost is an overview of the process to bake lighting on a model in CINEMA 4D and ensure that it survives the conversion into Unity.

A model with two sets of textures: the regular tiled textures (bricks, tiles…) that are seamlessly repeated over the geometry (using the regular UV coordinates) and a second texture, containing the baked lighting using a second set of UV coordinates.

Several people have developed their own routines to get this done, but I'd like to refer to two posts, where a user name "Artzfx" posted some details on his workflow.

The example I use is part of a finished Master thesis project, where an historical chapel was modelled in ArchiCAD, converted into CINEMA 4D and then visualised in an iPad app created with Unity.


So this is the plain model: geometry & textures. Nothing more. 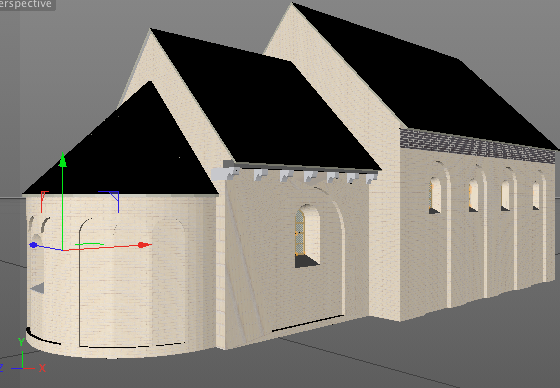 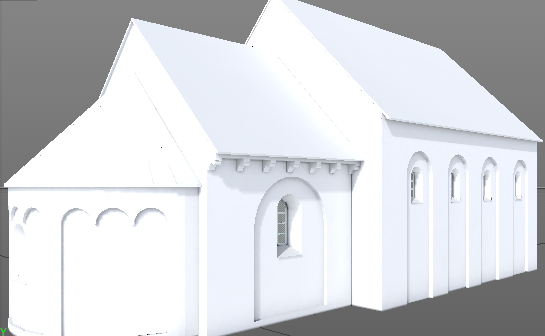 Beware: as we want to still have realtime shadows inside Unity, we should avoid direct Sun light and better opt for an overcast Sky in CINEMA 4D.

Now you can right click on the objects you want to bake in CINEMA 4D. Avoid glass (hide it) and group all objects so the bake can be performed in one step.

You get the following dialog: 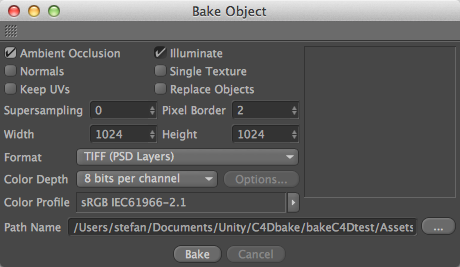 We chose Ambient Occlusion (AO) and Illuminate (the GI lighting, including the material colours, which are now white). Render size is 1024x1024 for objects that are not too big and preferably larger for objects that are bigger (like walls or roofs that span several meters). You can enable Supersampling (anti-aliasing) but it adds quite a lot to the render time.

When you opt for a Single Texture, all channels are merged into single image (lighting, AO, shadows, colour). Otherwise, you get individual images, which you can still compose inside Photoshop (or using an advanced Shader in Unity).

Locate your Path Name, which is ideally inside your Unity Project Assets folder.

Now you may Bake and take a break. Each object will be automatically unwrapped (to generate non-overlapping UV coordinates with minimal distortion) and rendered pixel by pixel into the baked image. At the end of the process, CINEMA 4D makes a copy of your selected object with the new mapping and hides the original one (without changing anything).

Press render to confirm that it still looks similar to the original rendering (but possibly with lower-resolution shadowing and some minor artefacts).

You also need to (manually) copy both the Texture and UVW tag from the Baked Objects back to the original objects. This is required to have both sets of UV coordinated transferred correctly. Ensure that each material tag has its corresponding UVW tag directly to the right of it. 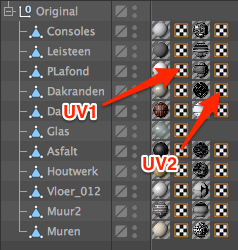 Now we are ready to export to Unity:

Set up correct shaders in Unity

Load the CINEMA4D or FBX model in Unity and apply your regular Import Settings. Do need generate a new set of secondary UV coordinates, though, as we just did so much effort to embed the already in the previous steps.

Now you still need to go through each material from the imported model and replace the default "Diffuse" shader with a Lightmap Shader (Legacy\Lightmap\Diffuse or Bumped Diffuse). This shader has two (or three) material slots:
This is what you get: